the nicholls worth • October 8, 2019 • https://thenichollsworth.com/7007853/sports/nicholls-football-recap-central-arkansas/ 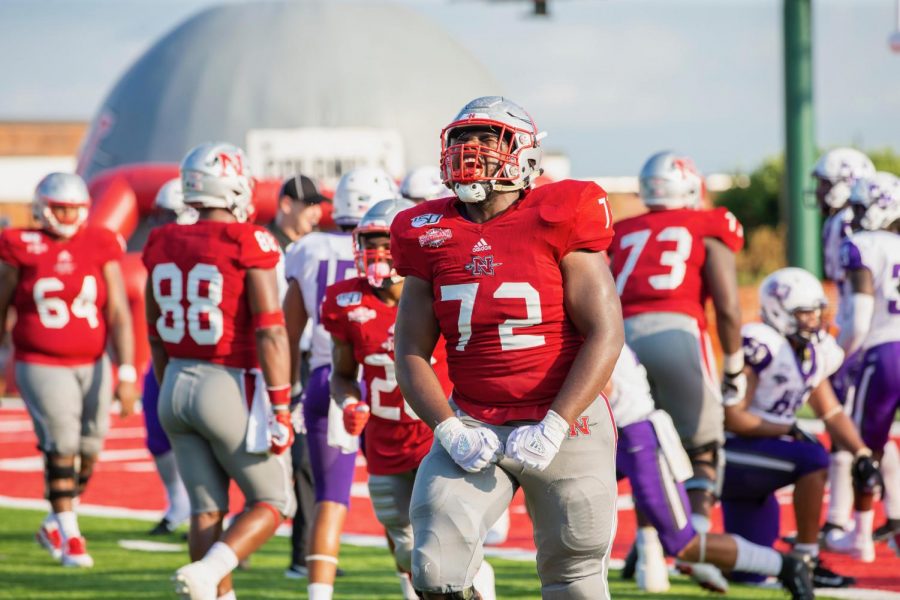 The Colonels came into the game as the number 15 ranked team in the Football Championship Subdivision (FCS), and the Bears were ranked number ten.

The Colonels made their home debut, undefeated in Southland Conference play. The Bears won the opening toss and elected to defer.

The Colonels opened the game with a nine-play, 90-yard touchdown drive. Senior quarterback Chase Fourcade ran it in from the one-yard line to make it 6-0 Nicholls, with 10:58 remaining in the first quarter.

The Bears would go three and out and be forced to punt. The Colonels would drive 98 yards on 13 plays, before fumbling the ball away on a quarterback sneak.

Nicholls would not go long without the ball, as senior safety Khristen Mims forced a fumble on the third play of the Bears’ drive that was recovered by senior linebacker Allen Pittman.

It would take just three plays for the Colonels to find the endzone, as sophomore running back Julien Gums would score on an eight-yard touchdown run. This made the score 13-0 Nicholls, with 14:36 remaining in the second quarter.

The teams would exchange punts on their next drives.

The Colonels would then drive 75 yards on just six plays, as Julien Gums would again score. This score was a 36-yard touchdown run to make the score 20-0 Nicholls, with 4:02 remaining in the first half.

The Bears would drive 64 yards before junior cornerback Darren Evans intercepted a pass at the two-yard line.

The Colonels would run the remainder of the clock out, thus ending the first half. At the half, the Colonels were leading 20-0 and outgained the Bears 329 yards to a mere 98.

On the opening drive of the second half, the Bears went on a 12-play, 75-yard touchdown drive. Sophomore quarterback Breylin Smith threw a four-yard touchdown pass to fellow sophomore Lujaun Washington. This made the score 20-7 Nicholls, with 9:50 remaining in the third quarter.

Chase Fourcade would throw an interception on the following possession.

The Colonel defense would force another three and out.

Nicholls would then drive 73 yards on just eight plays. Chase Fourcade completed a 26-yard touchdown pass to senior tight end Jordan Talley. This was the senior’s first touchdown of the year, and it made the score 27-7 Nicholls, with 3:03 remaining in the third quarter.

The Bears would turn it over on downs on their next possession.

The Colonels would put the game out of reach with a nine play, 49-yard touchdown drive. The drive was capped off on an eight-yard touchdown run by senior running back Kendall Bussey. This score would make it 34-7 Nicholls, with just 11:33 remaining in the game.

The teams would exchange punts on each of their next drives. The Bears would then turn it over on downs. The Colonels’ next drive would stall, as they would be forced to punt from their 40- yard line.

The Bears would score a meaningless touchdown with five seconds remaining in the game. This was a Breylin Smith 44-yard touchdown pass to sophomore wide receiver Kylan Robinson.

The final score would be a 34-14 Nicholls victory. The Colonels would also out-gain the Bears 477 yards to 320.

One very interesting note from this game is that Chase Fourcade became the seventh player in Southland Conference history to gain 10,000 total career yards.

The Colonels extend their regular season home winning streak to 11 and improve to 3-2 (2-0 in conference play) on the season.

Next week, the Colonels will host the University of Northwestern State Demons at John L. Guidry Stadium, as the Colonels look to go 3-0 in conference play for the first time in school history.

The Colonels have won the last three match-ups with the Demons. The Demons are 0-5 this season. You can tune in to the game on Cox Sports TV or 100.3 FM ESPN New Orleans.