the nicholls worth • September 30, 2019 • https://thenichollsworth.com/7007797/sports/nicholls-football-recap-texas-state/ 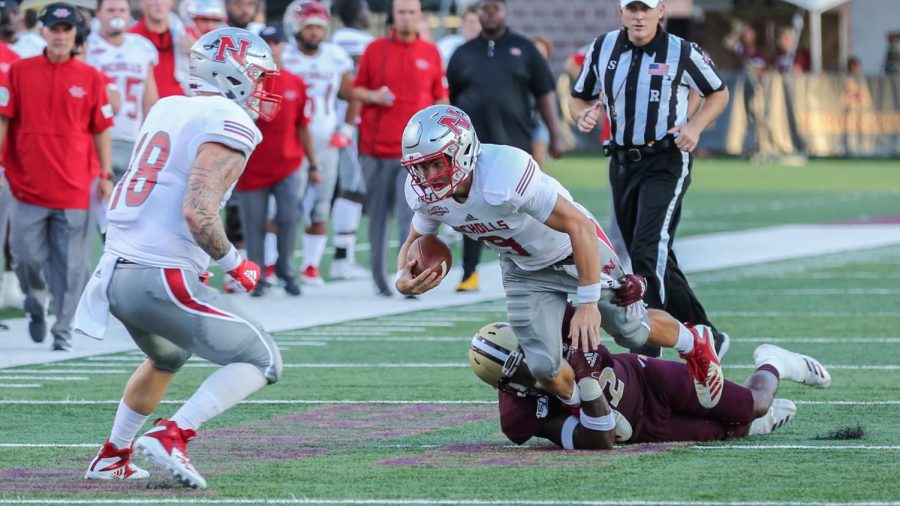 The “Battle of the Paddle,” as this game is called, began in 1998. In the 1998 season, central Texas was struck by Hurricane Madeline. The storm’s effects were greatly felt, as 31 people were killed and the storm caused $1.5 billion in damages.

The game was forced to be moved to a later date in the season, and the future matchups were named the “Battle of the Paddle,” in recognition to all who were impacted by the storm.

The tradition has carried on, even as the Bobcats were moved to the Football Bowl Subdivision (FBS), however, this is the first matchup since 2011.

Texas State won the opening toss and deferred to the second half. Nicholls was forced to punt after a quick three and out.

The Bobcats drove 46 yards on nine plays to kick a 36-yard field goal and take a 3-0 lead, with 8:15 remaining in the first quarter.

Both teams forced a three and out on the next respective drives.

The Colonels went on a grueling 14-play, 60-yard drive that ended in a 39-yard field goal by junior transfer kicker Gunnar Jones. This made the score 3-3, with 13:05 remaining in the first half.

On the ensuing drive, junior defensive back Kairon Brooks intercepted a pass and returned it to the 48-yard line of Nicholls.

Again, the teams would exchange three and outs. At the half, the score was tied at three.

The Colonels outgained the Bobcats 108 yards to 96. The entire first half was an evenly matched, defensive fight, with neither team scoring a touchdown and both teams averaging just 1.5 yards per carry.

Coming into this game, Nicholls has outscored opposing teams 43-0 in the third quarter this year.

The Bobcats came out of the half motivated and full of energy, as their first drive resulted in a 14-play, 78-yard touchdown drive, as junior quarterback Gresch Jensen completed a 12-yard touchdown pass to freshman wide receiver Micah Hilts. This score gave them a 10-3 lead, with 9:20 remaining in the third quarter.

On the second play of the Colonel drive, senior cornerback JaShon Waddy intercepted a tipped pass.

The Bobcats quickly took advantage of the turnover by going 56 yards in just six plays. Gresch Jensen punched it in from the one-yard line to make it 17-3 TXST, with 6:42 remaining in the third quarter.

The Colonels would drive to the red zone, before a strip-sack fumble forced by senior linebacker Nikolas Daniels was recovered by sophomore defensive end Emmanuel Galvan-Vazquez and returned the momentum back to Texas State.

The teams would yet again exchange three and outs.

The Bobcats would put the game out of reach with a 77-yard touchdown pass by Gresch Jensen to sophomore wide receiver Javen Banks. The score would make it 24-3 TXST, with 14:02 remaining in the game.

The remainder of the game consisted of a couple of drives by each team, not resulting in much before the Bobcats ran the clock to zero.

The Colonels were, very simply, outplayed in this one. They were outgained 362 yards to just 220.

The time of possession was about even, but the main difference in this game was third-down efficiency. The Bobcats converted on third down 35.7% of the time, while the Colonels converted a mere 16.67%.

One bright spot was the Colonels only committing three penalties in a very chippy game.

The offensive leaders in this game were senior quarterback Chase Fourcade, with 170 yards of total offense, and junior wide receiver Dai’Jean Dixon, with five receptions for 54 yards.

On defense, junior defensive back Kevin Moore III led with 14 tackles, senior linebacker and season tackle leader Allen Pittman gained nine tackles, Sully Laiche picked up a sack and a tackle for loss and Kairon Brooks had a tackle to go along with his interception.

Next Saturday, Oct. 5, the Colonels will make their home debut in a top 15 matchup. The Central Arkansas University Bears will come to John L. Guidry Stadium, as the Colonels look to improve to 2-0 in Southland Conference play.

The Colonels are ranked number nine in the FCS Coaches Poll, while the Bears are ranked at fourteen.

This is the first matchup against the Bears since a 31-24 road loss in 2016. The Colonels have also lost the last nine head-to-head matchups.

Central Arkansas joined the Southland Conference in 2007 and has made quick work, as they have won three conference championships (2008, 2012 and 2017).

This is a big game, as the Colonels seek back-to-back conference titles for the first time in school history. The team will need a packed stadium with passionate fans for, potentially, the biggest game of the year.

You can stream the game on ESPN+ streaming service or tune in to 100.3 FM ESPN New Orleans.