the nicholls worth • September 16, 2019 • https://thenichollsworth.com/7007682/sports/nicholls-football-recap-prairie-view-am/ 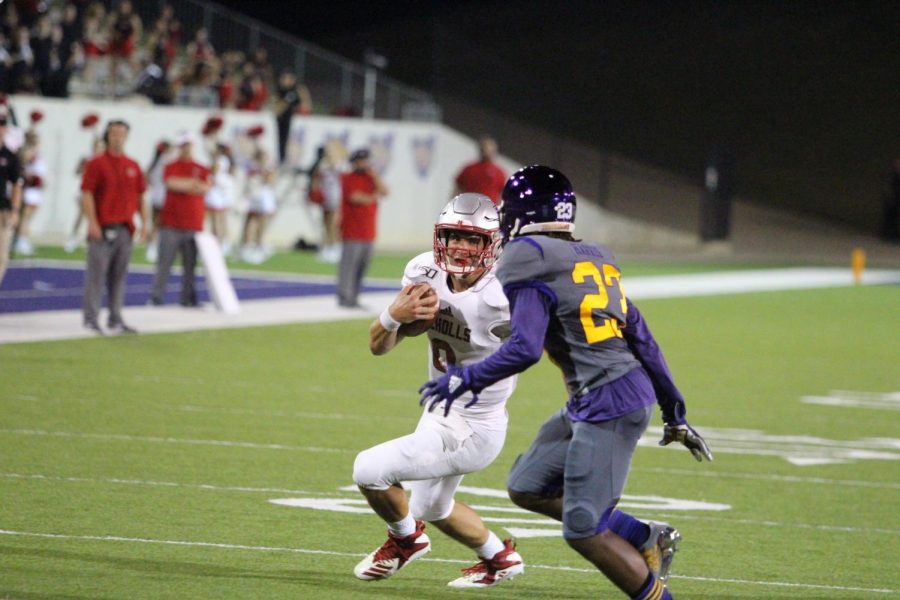 The Colonels came into the game fresh, following a bye week that gave them a chance to recover from the season opening loss.

The Colonels won the opening toss and elected to defer.

The Panthers, on their first drive, had two quick first downs, but were forced to punt.

The Colonels would take over on their own ten-yard line. However, this was no problem  for senior quarterback Chase Fourcade, as he lead a ten-play, 90-yard drive, resulting in a 15-yard touchdown run by senior wide receiver Dion Ray.

The Colonels would miss the point after attempt, so the score would stay at 6-0 Nicholls, with 8:29 left in the first quarter.

The teams would exchange punts on their next drives.

The Panthers offense drove 64 yards on just six plays, only to be intercepted in the back of the end zone by freshman defensive back Jarius Monroe.

This interception saved a potential Panther score, but it would not result in any points for the Colonels.

The Panthers offense would be too much to contain any longer, as they drove 61 yards in just six plays, resulting in a 23-yard touchdown run by senior quarterback Jalen Morton to take a 7-6 lead, with 11:48 remaining in the first half.

Nicholls would again drive ten plays, resulting in 63 yards. This drive, however, resulted in a 29-yard missed field goal. The score remained 7-6 PVA&M.

The Panthers quickly capitalized on the turnover, going 80 yards in a mere six plays. Ending in a 16-yard touchdown pass from Jalen Morton to junior wide receiver Tony Mullins, this made the score 14-6 PVA&M, with 3:52 remaining in the half.

The Colonels would gain a quick couple of first downs, before the drive stalled and they were forced to punt.

The 13-yard punt would gift the Panthers with tremendous field position, gaining control at mid-field.

Quickly, the Panthers again took advantage, scoring in just five plays and ending in a 39-yard touchdown pass by Jalen Morton to junior wide receiver Kalen Riles. This made it 21-6 PVA&M, with 52 seconds remaining in the half.

The team needed a spark. Luckily, they had something even better– veteran leadership.

The Colonels drove 93 yards on 11 plays, highlighted by Chase Fourcade and senior running back Kendall Bussey. The drive would conclude on a five yard touchdown run by Fourcade to make it 21-13 PVA&M, with 10:28 remaining in the third quarter.

On the Panthers next possession, junior safety Kevin Moore III forced a game changing fumble on a third down play, giving Nicholls the ball on the 49-yard line of the Panthers.

Julien Gums, sophomore running back, would lead the drive with three rushes for 23 yards as the Colonels would go 49 yards on six plays. Resulting in a Chase Fourcade touchdown to junior wide receiver Dai’Jean Dixon. Kendall Bussey would run in the two-point conversion to tie the game at 21 a piece with 5:33 remaining in the third quarter.

Kevin Moore III would again garner a big turnover. On the first play of the Panther possession, he intercepted Jalen Morton, returning the ball to the three yard line.

The momentum quickly turned to Nicholls favor, as Chase Fourcade would again find the end zone on a third down score from three yards out. Giving Nicholls a 28-21 lead with 3:46 remaining in the third quarter.

Senior linebacker Allen Pittman would recover a fumble by Jalen Morton on the first play of the drive.

Nicholls would recover at the 36-yard line of Prairie View A&M. On the first play of the drive, Chase Fourcade threw another touchdown pass to Dai’Jean Dixon. This made it 35-21, with 3:22 remaining in the third quarter.

The Panthers would answer with a grueling 13 play, 73-yard drive, including conversions on three third down attempts. The drive concluded on a touchdown run from the one yard line by Jalen Morton, cutting the Colonel lead to just seven at 35-28.

The Colonels answered with a ten-play, 66-yard touchdown drive. Julien Gums would punch it in for a score from two yards out to make it 42-28 Nicholls, with 6:41 remaining in the game. Two times on the drive, the Panthers were called for a pass interference on a third and long, extending the drive and allowing Nicholls to eventually score.

The Panthers quickly answered on just three plays, gaining a total of 64 yards. The drive ended on a 36-yard touchdown pass by Jalen Morton, again to Tony Mullins. This made the score 42-35 Nicholls, with 5:50 remaining in the game.

The Colonels would gain a quick first down but stall on offense, burning 3:32 off of the clock. Senior punter Winston Jones would make up for his earlier mishap, sending a 45-yard punt and putting the Panthers on their own 21-yard line, with just 2:18 remaining in the game.

The Panthers quickly got the ball to their 42-yard line, but would stall as the Colonels made some big plays. On fourth and five, the captain, Allen Pittman, displayed what senior leadership can do for a team, sacking Jalen Morton for a loss of nine and more importantly, a turnover on downs with 1:09 remaining in the game.

A couple of quick kneels would seal this one, resulting in a 42-35 victory for the Colonels.

The Colonels came out of halftime firing on all cylinders and showing exactly why they are ranked number 11 in the Football Championship Subdivision (FCS).

In the third quarter, the Colonels scored 29 points and allowed just 69 yards on defense. Also, they forced three turnovers in the quarter.

Most impressively, Chase Fourcade scored four touchdowns in under 12 minutes in the quarter.

Some leaders for the Colonels were Chase Fourcade, with 259 total yards to go along with two scores each on the ground and through the air, Kendall Bussey, who led with 84 yards on 18 carries, Julien Gums, who went for 74 yards on 21 carries and a score, and Dai’Jean Dixon, who led with 126 yards on seven catches and two touchdowns.

On defense, Allen Pittman and junior linebacker Aquindas Steib led the defense with seven tackles each. Pittman also earned a fumble recovery, a pass breakup and a sack. Kevin Moore III had an interception, a forced fumble and six tackles.

Jarius Monroe had a massive interception in the end zone to prevent a score in the first quarter to go along with a pass break up and three tackles. Junior corner back, Darren Evans led with two pass breakups, as well as four tackles.

Both teams ended the game gaining exactly 463 each. The major difference in this one was the turnover margin of +4 for the Colonels.

This trend continued today, as twice, the Panthers interfered with a pass on a third and long, continuing the drive that led to the last touchdown scored by Nicholls.

The Colonels evened their record at 1-1, heading into their first Southland Conference game of the year against the Stephen F. Austin State University Lumberjacks.

Nicholls looks to start the conference schedule off strong with a win on September 21 in Nacogdoches, Texas.