A tribute to Andrew Luck 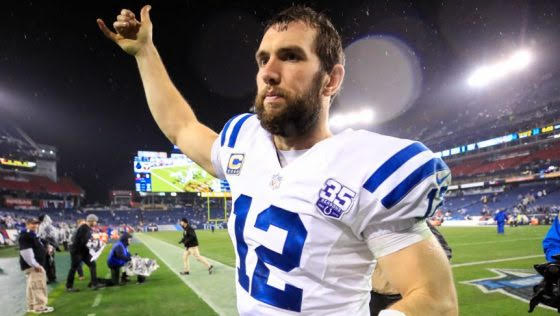 NFL Insider Adam Schefter broke the story during the third quarter of the Colts preseason game against the Chicago Bears.

Luck is retiring at age 29. This is very unusual, considering he is still in the prime of his career.

He is not the first great player to retire well before he should have. We have seen it as recently as Calvin Johnson in 2016 and Barry Sanders in 1999.

He is retiring after a plethora of injuries that have wreaked havoc over his career. Over the course of a six-year career, he has suffered: torn cartilage in two ribs, a partially torn abdomen, a lacerated kidney, one known concussion, a torn labrum in his throwing shoulder and an issue with his calf/ankle.

For Luck, this isn’t about football anymore; this is about his health. Luck says he wants to be able to live a normal life when he’s older; he wants to be with his family and live a long, healthy life.

Luck is much more than a football player. He was a high school valedictorian, college academic All-American and a Stanford University graduate with a 3.48 GPA in environmental engineering.

For any student, that would be incredible. Every student in the nation would love to be as successful in the classroom as Luck was. The crazy part is, he did all this while dominating in football.

He was the full package. He was always the smartest guy on the field, a great leader and widely considered the nicest guy in the NFL. Most importantly, he could sling it.

In his six-year career, Luck played in 86 out of 96 potential games. It is remarkable that even with his injuries, he somehow found a way to play, week in and week out.

Luck also made four pro bowls, making it in four out of his five full seasons. He was the 2018 Comeback Player of the Year. He also led the league in passing touchdowns in 2014 with 40.

Over his playing career, he has accumulated about $109 million.

The retirement isn’t about his love for football. If you watched his press conference, you can see in his eyes, through his tears, how hard of a decision it was. But it was a decision that had to be made, and anyone under his circumstances should have made it.

What Luck did on Saturday night was changing a narrative. For years, players have played until their bodies could not hold up anymore. This awful narrative contributes to the average age of death of former NFL players. This age is between 53-59 years old, per sciencemag.org  For context, the average age of death for an American male is almost 80. Luck set a precedent. He established something that more players should do. If you can’t get healthy or if your body is just falling apart, then stop. Being able to meet your grandkids, being able to walk in 15 years, is so much more important than a game.

“Something I learned last year, that if my worth as a human was going to be tied into how I did, the result of a performance in a football game, then I’m going to have, pardon my French, a real {expletive} life,” Luck said in his retirement press conference.

What he did actually proved the point of many NFL scouts in 2012. A lot of scouts said his problem was “he is too smart.” Scouts actually thought this reality would happen back in 2012. They knew he understood what is important in life.

“I’ve been stuck in a process,” Luck said at his retirement press conference. “I haven’t been able to live the life I want to live. It’s taken the joy out of this game… The only way forward for me is to remove myself from football.”

Luck, when retiring, left about $58 million on the table. Colts owner Jim Irsay thinks Luck would have made about $450 million in his career if he would’ve played until he was 40.

When drafted, he was thrown into a spot no young quarterback would want to be in. The Colts were coming off a 2-14 season after moving on from the legend, Peyton Manning. The 2011 season was the first season in a decade in which they didn’t make the playoffs.

A far fall from grace, they went from competing in Super Bowl XLIV to, two years later, being the worst team in football.

Luck was looked upon as the savior– the man who was supposed to rally the troops and bring them out of the Manning era and into another era of winning.

It is very safe to say he did just that. In his rookie season, he led the team to an 11-5 record, making the playoffs in the process.

In his career, the Colts were a brilliant 53-33 in games he started and a measly 2-8 in games he didn’t record a snap.

Andrew Luck is and will always be a name remembered for a long time. He is a man who loved football more than anything else but loved himself enough to walk away. He is a man who is an incredible role model, whether it be in the classroom, on the field or in the way a human should treat others.