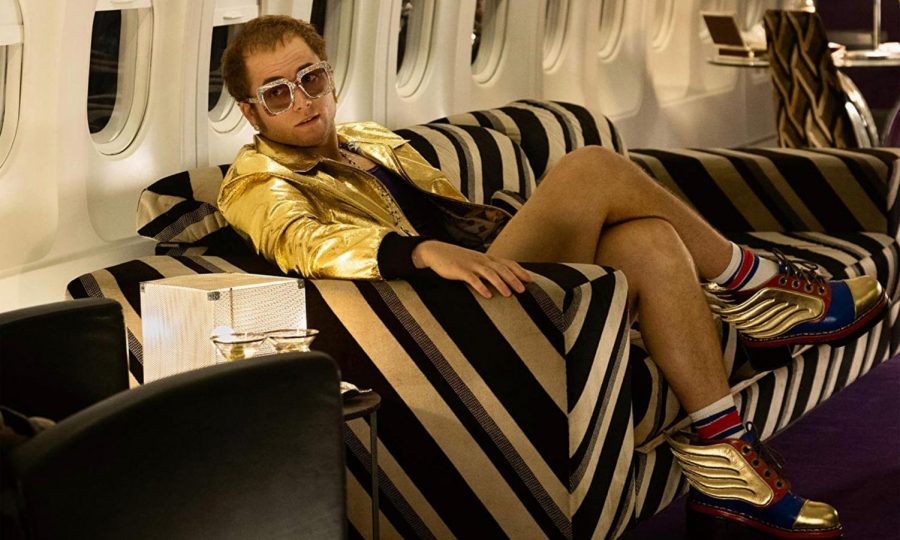 The music biopics keep coming with no sign of slowing down. On the tail of 2018’s Bohemian Rhapsody, Rocketman showed audiences what a truly honest rock biopic truly is.

Directed by Dexter Fletcher, Rocketman is a somewhat-clichéd, yet real representation of the first forty years of Elton John’s life.

What sets the film apart from other biopics is its raw nature. It does not shy away from delving into John’s own personal issues, unlike most biopics that intend to paint a more sanitized picture of its subjects.

Taron Egerton is electric as John, portraying his star power with a hefty dose of vulnerability. John narrates the story of his life from a rehab center, which is an interesting approach to storytelling.

He begins with his childhood, telling of his struggles with unsupportive, emotionally distant parents. John showed a great deal of talent and promise at a young age, and his main supporter was his grandmother, who pushed him to take advantage of the opportunities presented to him.

He tells of his great journey to success, along with the obstacles along the way.

John’s music plays a considerable role in storytelling—his songs highlight the highs and lows of his life. Rocketman sets itself apart from most musical biopics with its own fantasy musical sequences to assist in storytelling.

The musical aspect is a bit clichéd at times, but ultimately the movie serves its purpose with flamboyance and fervor.

Rocketman is everything a musical biopic should be. It fully delves into Elton John’s life and personality. As a result, it feels honest and personal.

The film tugs at the heartstrings and has the audience rooting for the main character—something Bohemian Rhapsody did not completely pull off. Rocketman feels a bit more raw and less sanitized, following not only John’s journey to success in his career, but in his journey into learning to love himself.

As a whole, the film is cohesive and entertaining. Its musical numbers, while a bit cheesy, are fun and assist in painting the bigger picture of the important events in John’s life.

The musical numbers help to bring greater attention to the emotion felt by each character. The film does not fall into the same patterns that most musical biopics fall into and it does not gloss over the less glamorous aspects of the subject’s life, nor does it twist details to make for objectively more interesting plot points.

Rocketman is an exciting and honest film. It utilized Elton John’s music to tell the story of his rise to success on a deeper level. The fantasy sequences were visually beautiful, as well as the costumes. If this influx of musical biopics is to continue, we should hope to see more of this nature.