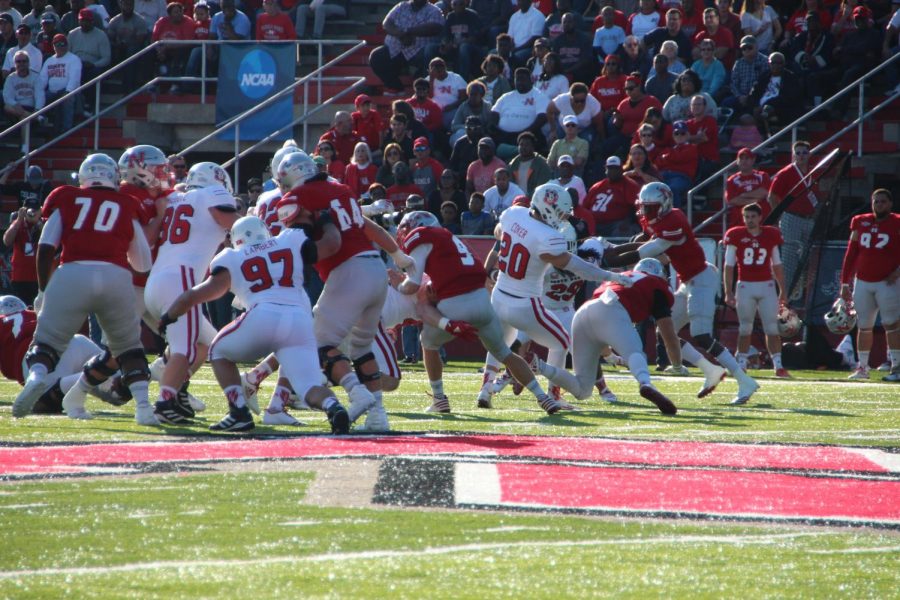 Although the Nicholls State University football team fell to the University of South Dakota in the first
round of the FCS playoffs, they managed to have one of the most successful seasons in program history.

In the first-ever playoff game held at John L. Guidry Stadium, the Colonels found themselves behind
after two turnovers led the Coyotes to a 14-0 lead to start off the contest.

The Colonels did not find the lead in the game but managed to catch up in the fourth quarter tying the
game at 31 after junior kicker Lorran Fonseca drilled a 43-yard field goal. Shortly after, South Dakota
answered with another touchdown on their next possession, but the Colonels were not done fighting
yet.

The Colonels neared the end zone on their final possession and needed to drive a few feet deeper in
order to even the game out once again. However, the football popped out of running back Kyran Irvin’s
grip as he went down.

The play went under review and was ruled to be a fumble after a close examination of the instant-
replay. This play put the final seconds of the game into the Coyotes hands where they ran the clock
down and claimed a 38-31 first-round playoff win over the Colonels.

Despite keeping a clean home record all season, the Colonels could not fend off the Coyotes after
suffering four turnovers to USD.

The Red and Grey finished their 2017 campaign 8-4 overall and 7-2 in the Southland Conference.

After Guidry Stadium was packed with 9,612 dedicated fans out of its 10,500 seat maximum capacity, it
was clear that the Colonels had set a new standard and begun a new era of Nicholls football. Not only
did Nicholls host its first playoff game in program history, but it was also the host of the biggest crowd in
any of the other first-round FCS playoff games.

From their 0-12 season in 2014 to their most recent 2017 campaign, the Colonels have experienced a
complete turnaround over the past four years. It is safe to say that head coach Tim Rebowe and his
coaching staff have transformed the culture of the program over the past three seasons.

In his postgame comments, Rebowe said, “I'm just very proud of the effort by our guys. I thought it was
a fantastic finish and we laid it on the line. Our guys fought; they kept scrapping and kept punching the
whole way through.”

The phrase “keep punching,” as previously mentioned by Rebowe in his comments, served as a source
of motivation for the Colonels that was printed on t-shirts, hash tagged on social media, and
represented a mentality that was spoken about frequently among players on the team throughout their
season.

In a season that ended in disappointment but was filled with pride from beginning to end, the Colonels
have proved that the future looks bright for the football program.