the nicholls worth • March 19, 2009 • https://thenichollsworth.com/102124/uncategorized/executive-board-members-campaign-for-sga-president/ 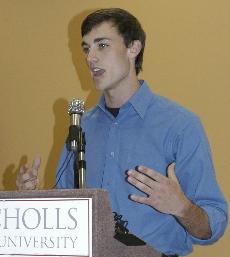 Ryan Donegan, SGA vice president, presents his platform to the student body at the candidate forum in the Student Union snack bar Wednesday.

Students will be electing a new SGA president next week between Marquita Christy and Ryan Donegan, both of whom are members of the current SGA executive board.Christy, SGA director of public relations, said the position of president could benefit from her personality. “I’m easy to talk to and get along with,” Christy said. “Students can always feel free to tell me their problems or their ideas.”Christy said one of her major goals as SGA president would be to find an alternative to the newly reduced printing quota in campus computer labs. “I want to see what we can do to better benefit students because the current system is not convenient,” Christy said.Christy also said she wants to sit down with the directors of residential life to help resolve the issue of housing students based on their classification. “Students weren’t informed of this ahead of time and they don’t agree,” Christy said. She also plans on trying to organize more progress on the campus recreation center.Aside from working with the SGA for four years, Christy has also served as the director of student rights and grievances, worked with residential life for two years and was part of the campus orientation team. In these roles, Christy said she worked with lots of different students with different needs. “I’ve seen what students across campus really need first hand, so I’m easy to come talk to about your problems.”Donegan, SGA vice president, said the SGA is currently an ineffective system, which he feels he could fix as president. “I joined SGA to fix an organization that is broken, to make student government what it should be – just that, a student government representing student concerns.”Donegan said being elected SGA president would give him the opportunity to make the changes needed for students to get the representation they deserve and to get everything they were promised. “I’m running for president because it’s time for a functional student government,” Donegan said.Donegan said his goal as SGA president would be to represent and fight for concerns of students at Nicholls, especially now considering the ominous budget cuts that the University will have to deal with in the fall. “I think it’s important that students are not only informed about the situation, but also that student services, student academic programs and student support programs are looked after and made important in the University’s decisions regarding budget constraints,” Donegan said.Donegan said his experience as SGA vice president combined with his love for Nicholls uniquely qualify him to serve as SGA president. “I will be an advocate of the students for the students, bringing fresh ideas, insight and objectives to the table and leaving the old dysfunctional practices of student government behind,” Donegan said.Elections for SGA president and vice president will take place online from March 23 to 25. 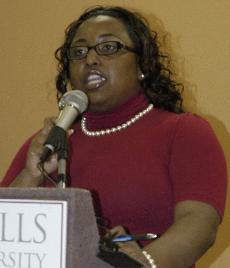